Traveling back and forth on Highway 2 over the years, I've noticed a large blue sign north of Airdrie for "PaSu Farm". The name PaSu brought up many questions: What kind of name is PaSu? Why is there a capital S in the middle of the name? After seeing the sign countless times, I finally Googled it. It turned out to be a sheep farm owned by a lovely couple named Patrick and Sue. There was also a restaurant that served food South African style (where Patrick and Sue are from). 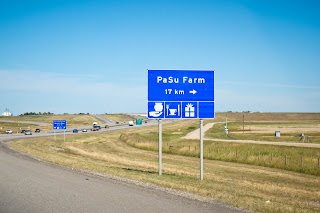 Our most recent visit was during the Christmas holidays. We stopped there for lunch and I had the chicken pot pie ($11). It had a deliciously flaky crust. Now as you may know, I'm not normally a fan of pie because I don't like most pie crusts. However the pastry topping the pot pie was very well done. The filling was loaded with meat, peas, carrots, mushrooms, and potatoes. The side garden salad ($3) was unremarkable. While I appreciated that they served the creamy balsamic dressing on the side, it was too heavy and strong for my liking.

Andrew had the fish of the day, which was a pan-fried tilapia served with a garden salad. The coating on the fish was the best part - it was generously breaded but tasted very light. The batter remained crispy until the last forkful! The buttermilk dressing served with the tilapia was light and creamy. It complemented the fish well.

For dessert, I had the lemon mousse cheesecake ($7.50). It's a light and fluffy, unbaked cheesecake that I had first tried during a visit over the summer for their Sunday lunch buffet. The lemon taste was subtle but I like how there was actual lemon rind mixed in. Because of the large assortment of tea on their menu, I paired my cheesecake with a pot of cranberry cream black tea. I was a little disappointed that they only served cream with their tea, so I chose to drink mine black. The fruit flavor in the tea was mild, but this is a good thing as I don't really like it when tea is so overpowered with flavorings/additives that you can no longer taste the tea.

Andrew's dessert was the pie of the day, which was the apple cranberry pie with a hint of orange and brandy ($6.75). He also chose to have it with a scoop of vanilla ice cream ($2). The pie filling was warm and wonderful, but the picky pie crust eater in me didn't like the crust. I also found the edge of the pie crust to be too thick for my liking. Andrew completely disagreed with my opinion on the crust.


As I had mentioned, our inaugural visit to PaSu farm was last summer for their Sunday lunch ($24.95 fixed price). As reservations are required to eat in their restaurant, they offer a plate or a buffet service depending on the number of people they expect (plate service for less than 15 expected guests). We had their buffet and the cold foods included a selection of salads, a vegetable pate, and platter of pickles and assorted cheese. The pate was divine; it tasted like an olive tapenade. It was so good that it inspired me to try to recreate it at home! The hot foods are served from 12:30-1:30 (seating times are from 12-1) and they include soup (split pea that day), roasted chicken, beef, and lamb, with hot vegetables. My favorite meat was the roast chicken. It was by far the best roasted chicken I have ever tasted: succulent, tender, and savoury. It was a little taste of heaven! The desserts that day were cream puffs, bread pudding, and lemon mousse cheesecake. 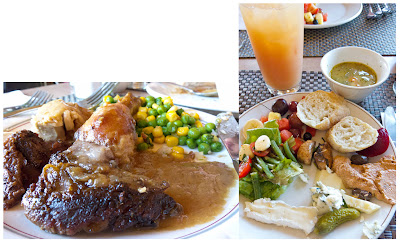 In addition to their restaurant and sheep farm, PaSu has a gift shop that specializes in moccasins, wool and sheepskin clothing and accessories, tea, seasonal gifts, and handmade lotions and creams. I bought a jar of the PaSu Intensive Hand Cream and I love it! It's light for a hand cream, but it actually moisturizes deeply without leaving a greasy feeling on your hands. It's scented with a blend of essential oils. While the scent is so unique that I quite enjoy it, Andrew would disagree.

PaSu's restaurant and boutique shop are open Tuesdays through Sundays all year round. The restaurant is open for lunch and afternoon tea from 12-4 PM, although they do have some special events throughout the year that include dinner, such as their summer BBQ dinners or winter dinner theatres. When in the restaurant, you'll be greeted by a chatty parrot named Peaches. The dining area boasts large windows that offer a mountain view. During both visits we've had fantastic meals there and will be sure to frequent PaSu farm again on future road trips.